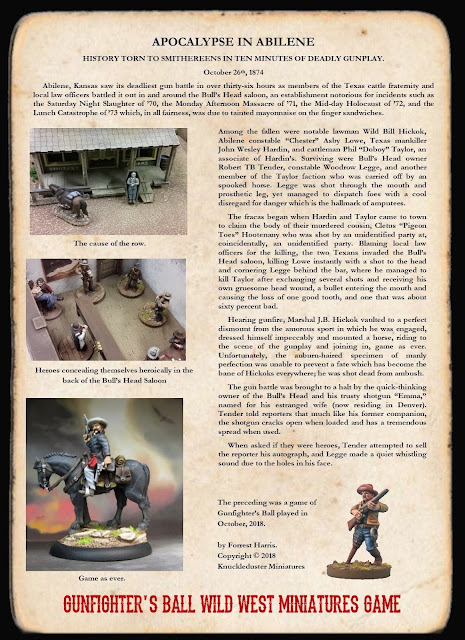 Abilene, Kansas saw its deadliest gun battle in over thirty-six hours as members of the Texas cattle fraternity and local law officers battled it out in and around the Bull’s Head saloon, an establishment notorious for incidents such as the Saturday Night Slaughter of ’70, the Monday Afternoon Massacre of ’71, the Mid-day Holocaust of ’72, and the Lunch Catastrophe of ’73 which, in all fairness, was due to tainted mayonnaise on the finger sandwiches.

Among the fallen were notable lawman Wild Bill Hickok, Abilene constable “Chester” Asby Lowe, Texas mankiller John Wesley Hardin, and cattleman Phil “Doboy” Taylor, an associate of Hardin’s. Surviving were Bull’s Head owner Robert TB Tender, constable Woodrow Legge, and another member of the Taylor faction who was carried off by an spooked horse. Legge was shot through the mouth and prosthetic leg, yet managed to dispatch foes with a cool disregard for danger which is the hallmark of amputees.

The fracas began when Hardin and Taylor came to town to claim the body of their murdered cousin, Cletus “Pigeon Toes” Hootenany who was shot by an unidentified party at, coincidentally, an unidentified party. Blaming local law officers for the killing, the two Texans invaded the Bull’s Head saloon, killing Lowe instantly with a shot to the head and cornering Legge behind the bar, where he managed to kill Taylor after exchanging several shots and receiving his own gruesome head wound, a bullet entering the mouth and causing the loss of one good tooth, and one that was about sixty percent bad.

Hearing gunfire, Marshal J.B. Hickok vaulted to a perfect dismount from the amorous sport in which he was engaged, dressed himself impeccably and mounted a horse, riding to the scene of the gunplay and joining in, game as ever. Unfortunately, the auburn-haired specimen of manly perfection was unable to prevent a fate which has become the bane of Hickoks everywhere; he was shot dead from ambush by an assassin at the window behind him.

The gun battle was brought to a halt by the quick-thinking owner of the Bull’s Head and his trusty shotgun “Emma,” named for his estranged wife (who is now residing in Denver). Tender told reporters that much like his former companion, the shotgun cracks open when loaded and has a tremendous spread when used.

When asked if they were heroes, Tender attempted to sell the reporter his autograph, and Legge made a quiet whistling sound due to the holes in his face.

The preceding was a report from an afternoon game of Gunfighter’s Ball, the Wild West tabletop miniatures game. Six friends rolled dice, drew cards, and moved miniatures around a model town, producing the results detailed in this story. A good time was had by all.

Find out more at www.knuckleduster.com/gb.html and look up our game play video on YouTube.

Posted by Forrest Harris at 5:53 AM 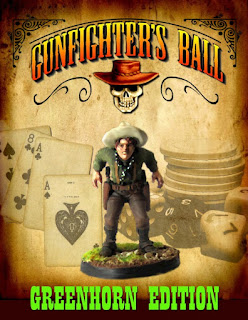